Luis Carlos de León Santos, better known on the internet as TheNino, has risen to prominence within the Free Fire community and has been able to capture a global audience. He hails from the Dominican Republic and ranks among the top content creators to come out of the nation.

The YouTuber is presently ranked Diamond IV and Platinum IV in the Battle Royale and Clash Squad modes. His detailed stats are as follows: 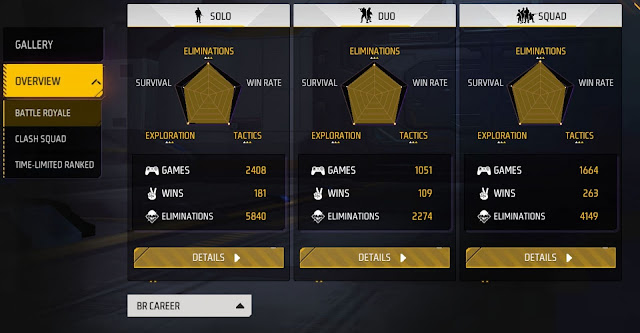 Inside the current ranked season of Free Fire, TheNino has played 17 games but has failed to secure a win. At a K/D ratio of 1.65, he has 28 frags in the game mode.

The YouTuber has competed in 21 duo matches and has two Booyahs, converting to a win percentage of 9.52%. He has accumulated 44 kills, upholding a K/D ratio of 2.32.

Finally, TheNino has participated in 36 squad matches and has one victory, translating to a win rate of 2.7%. There are 77 kills to his name for a K/D ratio of 2.20.

Note: TheNino's Free Fire Max stats were recorded when writing the blog (27 November 2022). They are subject to change as he plays more matches in the battle royale title. As per Social Blade, TheNino's monthly YouTube earnings lie between $10.2K and $163.1K. In contrast, his projected yearly income from the YouTube channel ranges from $122.3K to $2 million.

TheNino has consistently posted content on YouTube related to several games, including Free Fire and GTA V. There are currently 655 uploads on his channel, of which the highest-watched one is his song, with 111 million views.

The past month has been incredible for TheNino as his subscriber count has increased by 660 thousand. His overall views have further risen by a total of 40.764 million.