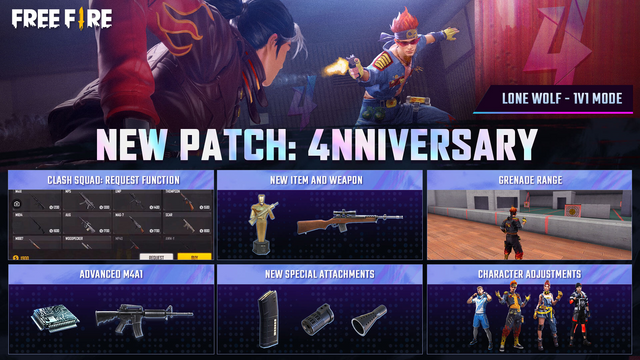 "Introducing Lone Wolf, a new gamemode on the new map Iron Cage. In this mode, you can play against another player in an intense, best of nine 1v1 battle to see who is the better player. Challenge yourself to survive in the Iron Cage!"

Are you ready for some 1v1 battles?

New Feature Available in Casual and Ranked"We understand that it has always been a pain to ask teammates for a weapon in Clash Squad. This patch, we are introducing a feature that allows you to request your team to purchase an item directly to your inventory."

Item Request available in Clash Squad.Can I get an AWM?

Players can now choose to display their backpacks in Clash Squad from the Vault.

Ranking Up Difficulty Adjustment"Ever since we've introduced the revival system, we realized that ranking up has been a bit more difficult than before due to opponents returning into battle after death. We're adjusting the points calculation in the Battle Royale to make sure the ranking up experience is easier than before."

Increased the total rank points output in the Battle Royale.

Optimized HUD Display"We've received feedback that it is hard to keep track of your FF Tokens while playing in-game. We added an HUD in the backpack menu so you no longer need to browse through your backpack to see how many tokens you've got."

New Character Available Soon"Dimitri will be our new character joining Free Fire in this patch. With his active skill - Healing Heartbeat, Dimitri can assist his downed teammates to recover themselves while providing cover by staying in battle."

New Character Available Soon"Introducing Thiva, a newcomer who can help recover fallen teammates rapidly in battle. With his passive skill, Vital Vibes, he can greatly reduce the time it takes to help-up his teammates in dangerous situations."

Character Skill Rework"It is currently a bit difficult to activate Jota's skill because taking down a downed enemy usually exposes himself to danger. We're giving the skill a rework in this patch so players can have a smoother time using Jota on the battlefield."

Character Stats Adjustment"Luqueta's Hat Trick currently does not offer enough HP for players to take the risk of taking down enemies. We're giving this skill a small adjustment so players get slightly more HP when the Hat Trick is used."

Character Stats Adjustment"Gear Recycle currently takes a bit too long to charge up so players find it more efficient to pick up a new set of armor directly. We're giving this skill an adjustment so players can upgrade and repair their armor without picking up a new one."

Character Stats Adjustment"Alvaro has been underused in the current meta because the damage increase from Art of Demolition was not effective enough in terms of reducing players' room of error when throwing the grenade. We're giving his skill a small buff in this patch to make it slightly more explosive."

UI and UE update"It is long overdue since we've made an update to our lobby design. In this patch, we're giving our lobby a new look! We have relocated a few functions and increased the overall size of all the buttons in the lobby so it is easier for everyone to find and click on them. Let us know what you guys think!"

New Running Mechanism"We've received feedback that some players prefer to drag their joysticks to sprint instead of pressing the sprint button. We're adding this option to the settings menu for players who are more used to this type of controls."

Drag to Sprint option available in the settings menu.

Activity missions and rewards will now be combined into the Fire Pass Missions menu.

- Likes received at the end of the match will now be shown at the match results page. - Changed the model of the SMG ammo so it matches its icon. - Fixed a bug where the "waiting for players" message in Clash Squad remains even after both teams are filled. - Players will now hide teammates’ pets when hiding their own pets. - Ammo types that cannot be used will now be shown in the inventory. - Reduced the transparency of the bomb in "Bomb Squad". - Removed the advanced attachments UI from the map. - Added a notification sound when the team captain starts matchmaking. - Optimized Multi-kill announcements. - Air Hammers can no longer be brought into the Combat Zone in the Training Grounds. - Added a queue for the 1v1 ring in the Training Grounds. - Added a name for each Clash Squad weapon shop. - Clash Squad now supports simplified killfeed. - Deadly Velocity will no longer have a pop up message when activated. - Battle Style Badge collected after the match will now be shown on the match summary page.